Enrique Fernández Arbós (1863-1939) was a Spanish violinist, composer and conductor who split much of his career between Madrid and London. He studied at the Madrid Conservatory as well as in Hamburg, and also the head of the Berlin Philharmonic Orchestra and the Boston Symphony Orchestra. In 1894, he became professor of the violin at the Royal College of Music in London where he taught until 1916. In 1904 he was offered the position as head of the Madrid Symphony Orchestra, a position he held for almost 35 years.

The music today invites you into the Arabic night, a world with caliphs and sultans with incredible treasures, thieves and heroes on flying carpets, intoxicating perfumes, charming princesses and evil magicians. Close your eyes. Let yourself be taken by the music and enter the dream world. 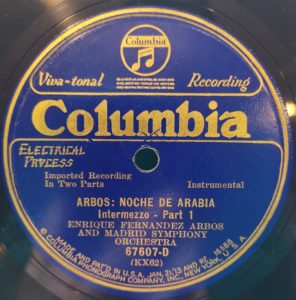