Szulc began his formal education as a pianist at Warsaw Conservatory under Moszkowski. He also lived for a brief period in Berlin and moved to Paris later in 1899 to complete his studies in conducting and composing. He moved to Brussels in 1903, where he became conductor of the Théâtre de la Monnaie and immediately gained success with the ballet Ispahan. His wife, Suzy Delsart, was an operetta star and influenced his husband to write lighter and more popular melodies. He completed in 1907 the music of Marcel Gerbidon’s operetta, Flossie or Je m’appelle Flossie.

In 1914, Szulc composed the music of the musical comedy Flup! to a libretto by Gaston Dumestre, which had a successful premiere in 1920, followed by 5,000 performances. His other successes included Titin to a libretto by Gaston Dumestre. Between World War I and World War II he composed almost twenty operettas. In addition, he wrote music for poetry by Paul Verlaine (Opus 83). Szulc wrote a few other songs to German poetry, which was published in Berlin for a short period. He also composed a violin sonata. 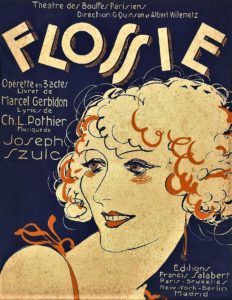