Elgar was an English composer inspired by the 19th century romanticism, which characterized his bold melodies. His own musical idiom was cosmopolitan, but his interest in oratorio is grounded in the English musical tradition. Especially in England, Elgar is respected both for his own music and for his role in heralding the English musical renaissance of the 20th century. 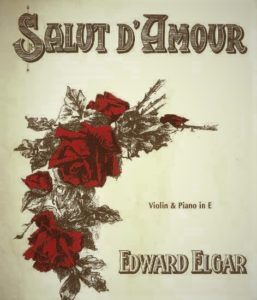 Salut d'Amour is among the most famous works of Sir Edward Elgar. The work was composed in 1888 and was an engagement gift to Caroline Alice Roberts, whom he later married. The first movement was named "Liebesgruss", which translates to “love greeting”. The music was released in Germany, but didn’t gain much popularity. Scott & Co later released the music with the title titled "Salut d'Amour" which became a great success. The original version is written for violin and piano, but there are also versions for solo piano, cello and piano, as well as chamber orchestras. The first orchestra version was recorded in "Crystal Palace" on November 11, 1889, and The Gramophone Company made the first recording in 1915, with Elgar as conductor.