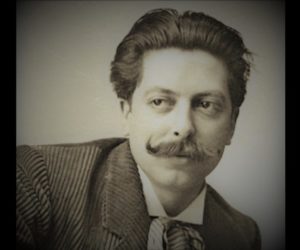 Granados was a composer and pianist, and often referred to as the leader of the movement against nationalism in Spanish music from the late 1800s. Granados debuted as a pianist when he was only 16 years old. He studied composition in Barcelona and continued the studies until 1887, then as a performing pianist. He returned to Barcelona in 1889 and established himself as a pianist. In this city he composed 12 Danzas Españolas, who were well received. The first of his seven operas, María del Carmen, was produced in 1898. In 1900 Granados founded a classical concert association and a piano school, which graduated several prominent musicians. His interest in the 18th century music is reflected in Tonadillas, a work written in “old style.” His masterpiece, Goyescas (1911-13) reflects on Francisco de Goya’s paintings. This work was adapted to an opera that premiered in New York in 1916. When he came home from this performance, Granados drowned when a German submarine attacked his ship, Sussex.